Raised by her brother at a young age, she fell in with the wrong crowds as he joined the military to support both of them.

Being intelligent she picked up using computers and the like quite quickly and as such the gang she fell in with pushed her towards hacking and the like even going so far as convincing her to get cybernetics to help out of course that was paid for with stolen money. 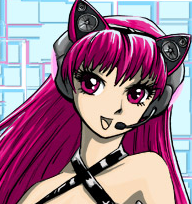