Crank Clarion is a junk crab from the Clarion tribe (which derives their name from the Clarion trench where they first settled after coming to Rifts Earth) and was one of the Children of Iméra. Crank’s parents were part of a nomadic village and they through him out when he was 8 and told to only return when he had found a unique technology as well as building and impressive shell and finding a mate from another Junk Crab family; as was their tradition. He wandered around before he was found by another Junk Crab group who were under the employ of a Dr. Shore and they took him in to help him get a start on his mission. What Crank didn’t realise was that this would lead to him being put into the Zenith Day Project; succeeding Timothy Byron who was rejected and kicked from the project after it was uncovered that he was terminally ill.

After the events that occurred both on the island and on Tritonia years later, Crank needed answers. He was sick and he was not sure why; his body was changing and it all seemed to be linked to the medication he stopped taking and the people he used to work for. Crank went back to his former employers and in doing so, he discovered a great deal about the Children of Iméra and the Zenith Day Project. He learned what had happened to him but Crank no didn’t seek vengeance or justice; he just wanted no more part of it. A deal was struck that day between Crank and the researchers; in return for Crank’s silence about what had happened and a promise to not compromise their work, Crank would return to them only once per year to receive a year’s worth of the suppression medication. This arrangement was a win-win for both parties, as Crank got freedom and safety back into his life while the researchers no longer had to worry about Crank derailing their plans or bringing what he knew to authorities who could shut them down. There was another benefit though for the researchers; they were also able to viably see the long-term side effects of the suppression drugs on a non-humanoid. Now with Crank free of that section of his life, he was able to do this own thing and live his life how he wanted.

Unfortunately for Crank, he had trouble of letting go of the past. The other children and the horrible things that happened did bring them all together and they were so much of his life for so long. But to Crank’s dismay, almost all of this children were ‘growing up’ and growing apart and not many seemed to really have time for Crank anymore.To Crank’s dismay, he once again had no idea what to actually do with this new freedom. He could go find work at a scrap yard or repair shop, but that would never get him any closer to achieving his goals. For the next year he just spent it travelling; trying to find something to bring excitement and happiness back to his life. He realise that what he really missed was adventure and danger; sure he and his friends almost died quite a few times but those were times he looks back on as some of his favourite memories.

A few days before the first anniversary of achieving his ‘freedom’, Crank found the excitement and adventure he was looking for, although he never imagined it turning out the way it did. Crank awoke from his sleep to the sound of someone moving around near him outside his shell. He heard a soft voice say ‘What the hell is this; a pile of junk just lying here by the beach? Oh well I think I could hide here…’ followed by the noise of the door of his shell open up. To this day, neither of them really know who was more surprised as to what they found that day. From Crank’s perspective he saw the silhouette of a petite young woman cascading in from the searing morning sun. The sound of two screams echoed out on that beach that morning. It was obvious that she was running from someone so Crank stretched out of his shell, allowing this young girl to climb in and hide.

As it turned out, this young girl was running from a group of thugs who attacked her.
Her story: She was jumped by a bunch of creeps and she fought them off valiantly and ran 2 miles under laser fire to this beach to hide from them before they found her.
What actually happened: It was one guy who tried to mug her a block away from the beach, she kicked him in the crotch, took his laser pistol and ran a block away not realising that this way only led to the ocean.

Regardless of the less than heroic truth of her story, Crank instantly took a liking to her. 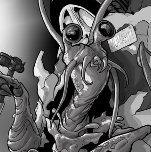