Dale was born into society as a Coalition citizen, a fact that many would consider a gift and treat Dale as a man of extreme luck. Dale isn’t lucky, nor is he what anyone in their right mind should consider “gifted”. The opposite is true. If genetics was a lottery, Dale clearly got landed with the booby prize, his only quality of merit being that he has an incredible degree of mental endurance, a quality that a man of his stature would need to endure the taunts he was subjected to growing up.

As a mentally challenged young lad, Dale was easily the most prominent target for the schoolyard bullies, constantly bombarded with ridicule and often acts of violence. If Dale was to be considered “lucky” in any respect, it would be that his limited mental faculties painted a target prominent enough that his obesity went ignored, not significant enough to be ridiculed.

Not content with living as the punching bag of others, Dale strove for a better lot in life, his efforts rewarded with his dream position. He was now an agent at the top secret Lone Star facility in the position of “Special Maintenance Operative”. For a time, his life as a Janitor would be considered the peak of his existence. It was a position that gave him great pride and was treated as a sign that the respect he craved so relentlessly would surely follow. The job itself, was significantly less endearing. Although it was undeniably a step up from being the punching bag of others, Dale hated his duties enough that any opportunity to minimize them was considered a divine gift. Although not divine in nature, that gift was given to him at the hands of Doctor Desmond Bradford and Doctor Henry Clemons. The deal was simple: If Dale was willing to undergo a tiny bit of genetic manipulation, he would be allowed to take an extra 20 minute break each day with full pay; Not really understanding what genetic manipulation was, the choice was obvious – Dale might not have been too bright but he understood that a little extra work now was nothing compared to an extra 20 minutes break each day for the rest of his life. As it turned out, Dale’s 20 minute break quickly expanded to what Bradford would wish to be a lifetime of inactivity.

Dale’s genetic augmentation mutated out of control, not physically but mentally. The results being an entire new breed of Psychic which excited Bradford beyond all measure. Never before had he achieved such a perfect augmentation on a human being – he couldn’t let something as trivial as human liberty delay the progress in his new subject, Dale had to be imprisoned for the sake of scientific research. Dale wasn’t as opposed to imprisonment as one would expect, he didn’t understand how or why but he clearly understood that his presence was helping people and it gave him a sensation of importance even greater than his previous position. It wasn’t until he witnessed another Special Maintenance Operative performing his old duties, that he finally realized the situation he was in. He had not been promoted, he had been replaced and stripped of all title and prestige. That realization left Dale in a state of despair that no previous bully had ever achieved. Although an emotional response deeply rooted in negativity, that despair would prove to be Dale’s only salvation from his miserable existence. Dale’s constant whimpering was finally heard. Doctor Henry Clemons finally succumbed to the unfiltered emotion emanating from Dale’s cell and released the poor creature back into the wilds, with only one short warning to send him on his way “They will be looking for you”. That act of compassion is one Dale has yet to forget and one of the only memories he has that seemed equally pure during both his times as a human and an enlightened being.

Although even Dale is smart enough to be sure that Bradford and his men were looking for him, he saw no sign of it. Apparently Dale’s mentality is too alien to the Genius of Bradford and his simple evasive techniques well too mundane for the scientist to even consider. Dale’s life had finally begun the normalization process – he even managed to get himself a new job as a Special Maintenance Operative near Lazlo. His employer was a little strange and quite frightening; Being a monster which Dale had been taught to hate, but it seemed that hate was among the many teachings that Dale had failed to learn and Willie couldn’t have been so bad – he was nice enough to hire a wretch like Dale after all.

Dale’s life continued in a mundane manner until one day, when he heard strange noises coming from the barn and made the mistake of seeking out the noises to determine their origin. That mistake is one that led Dale down a path of tragedy, leading to a mind-shattering event that would forever destroy the illusion of blissful ignorance. The barn was occupied. Its basement a host to an array of imprisoned misanthropes that Dale was compelled to aid. Those same misanthropes led him down the proverbial rabbit hole and back again. Although Dale’s fragmented mind no longer recalls the events clearly, he knows that it resulted in tragedy for all those involved, perhaps none more-so than Dale himself.

Fleeing the farm with the captives, the group found themselves in Lazlo, passing time in a menial manner while seeking aid. That aid came in the form of knowledge and the realization that Willie is also a victim of circumstance, a mere construct that has been driven to insanity by grief and the loss of his father. A heartfelt story that Dale’s fragmented mind remembered above all else. Wishing to help Willie endure his grief, Dale and his party returned to the farm but Dales wishes would only be met by carnage. The farm could only be considered a bloodbath, a bloodbath resulting in Willie’s usually un-expressive face being tormented enough to form expression of agony before disappearing in a blinding light. The victim of circumstance was now also a victim of an entity powerful enough to seemingly kill the deathless. Without time to even acknowledge the situation, Dale would too become a victim, only he was victimized in a much less obvious but equally cruel manner. Dale was given enlightenment. He was elevated in position, mind, body and soul and welcomed to the Divine. All of the lessons in life that Dale had failed to comprehend, all of the mis-treatments he had endured without knowing the nature, all of the knowledge in the world it seemed was now in his possession. It would have been a gift of grand proportions if only it had been permanent. In practice, the sting of time and the awareness of his own shortcomings only proved to be a torture far greater than the human mind could ever conceive. It was a torture befitting of the divine.

Unaware that he was on the clock, Dale’s life became one every child dreamed of. He was a superhuman and acted it in every way: protecting innocents, fighting criminals and saving the damsels in distress. And on the last count at least, he received much in the way of action. There were many, many damsels seemingly sensing his divine nature and throwing themselves at him. As a man that had never lay with a women without payment, the transition was pure bliss. Although blissful and now a man of intelligence, that happiness still stemmed from blissful ignorance, if he was aware that his powers were temporary, rather than living his dreams he would have strove to find a way of making them permanent. By the time he realized his mental faculties were dwindling, he was still aware that there were ways of adding permanence to his transformation, but he was no longer capable of attaining any level of permanence.

As his divine presence faded, so did his mental and physical attributes. The last of his days as a divine being spent in isolation, frantically writing down his every thought like a man on fire, trying to preserve the last thoughts of worth that he would ever have.

His phase of enlightenment now long over, Dale has become a recluse, now aware of all the little ways society likes to crush his spirits and too stupid to defend the taunts. Isolation is the only answer he can muster. Not entirely a hermit, he has managed to find himself a job in Lazlo as a Janitor but his days are spent in his duties, never speaking to anyone if he can help it. His nights are spent longingly, staring into his journals that he can no longer read. 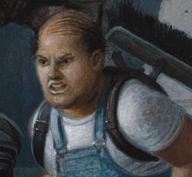