As child of Russia he was use to conflict that soaked his lands. The civilians of Russia owe their survival to their warlord, and as such were forced to work.

He started his young life (8 years old) in the mines harvesting and carefully removing gemstones from unprocessed ores, a child’s hands can handle much finer delicate work then that of adults which have lived a life of heavy labor. As he continued throughout his daily duties his skills dealing with gemstones and precious metals grew and when he turned 13 they moved him toward the smith to build his body to prepare him for survival in the mines or as a soldier. The work was hard but before he removed the gemstones and precious metals from the ores now he was able to witness the flow of crafting items and how everything flowed together. He dived into the role of a apprentice smith.

A few months after reaching 15 a smelting accident occurred which horrifically damaged his legs. After recovering he expected to get thrown out of the warlords camp as disabled people are too much of a burden and are best disposed of as he has seen before sent out into the wilderness to survive on their own. When the officer arrived he begged and pleaded to not be thrown out to the wolves, the officer left unaffected by the words of the now disabled Hugo. Unknown to Hugo the head smith went to discuss his future just before the officers visit to Hugo, the smith explained to him that if the boy’s injuries didn’t impede his abilities in the forge he would take the child as a full apprentice because “the metals speak to the boy and melt in his hands and form fantastic things”, he then revealed the officers decorated official blade was actually crafted by that child when he was 14.

Left unknowing his immediate future he panicked and grabbed the near by notepad usually used by dying patients to write their last will and begun spamming designs for dozens of weapons and armors trying to show his worth the next time. Much to his surprise he continued to receive treatment, the nurses treating him upon request gathered his random designs and took them to the Officer in-charge of his case, looking these over and discussing them with engineers they were able to complete or further develop some of their current equipment, parts of his designs were used in a variety of armors and weapons the arm bracers in the lynx armor was his but had instead of firing explosive bullets they converted it to dual vibro blades, The experimental chambering system of the AR-44 “Sledgehammer” Rail Gun was also based of one of his designs. Unknown to him many of his random sketches over the years were converted by the warlords engineers. The officer stayed silent never revealing the truth of his contributions (why possibly stop the flow of useful designs?).

After a month of bed rest his Physio treatment began he had to learn how to walk all over again. He was nearly 17 by the time he could walk well enough to work.

Upon returning to the forges as ordered by his superiors it was as if he never left besides his slower walking pace but that also assisted him he took more time was more patient and didn’t rush any jobs creating fine weapons, tools, armors and eventually even jewelery for the warlords family. He was content and grateful for never been thrown out after his injury.

As he hit 18 it was usual tradition of this warlord to recruit all able men into the military and after 8 years of service they would free them from their requirements as citizens of the warlord, Because of his injury he was not viable for military recruitment and instead was promised after 8 years of service as a smith he would be freed instead. He hastily agreed fearing that if he rejected it they would throw him out like most other crippled.

After about 6 years of work (when his 24) his name has spread and his jewelery has become quite popular with the warlords main wife. He was summoned to the warlords main camp and personally requested by the warlord to craft a particular piece of jewelery for the warlords wife as a anniversary gift and as such he would be given a boon if the piece was beyond compare. This item was a double edged sword for Hugo, if he met their requirements for this he would be well rewarded maybe with his freedom from servitude but if he failed he would most likely be evicted from the camp or maybe worse executed and there was a time limit it must have been made in 2 months time. He spent many nights wonder what he should make a broach, necklace, ring, armband, etc. It was finally decided after studding and discussing with the warlords wife’s servants a gold collar with ruby, sapphires and onyx gemstones, with silver chain necklace weaving intricately down to a amulet with a large diamond in the center but he only had a week to complete it never enough time. The following night Salvrog the divine visited him lost in awe of the god who visited him and informed him if he wishes to complete the task all he had to do was pledge the oath and inform the warlord that he was blessed with a visit from Salvrog the divine requiring my aid, he said the warlord would grant Hugo his freedom and then Hugo must embark on a journey to help those in need, Hugo still in awe of this divine beings words and rumors he has heard randomly around the forge about chosen ones of Salvrog pledges the oath and immediately awakes to his entire body feeling like it was aflame after a good 10 minutes of agony he falls back to sleep. He wakes to himself standing over a forge in one hand a golden pair of tongs in another hand golden hammer as he looks down on the completed jewelery requested, 4 days has passed.

He looks around and a giant golden hammer is leaning against the wall, several other mysterious items are around the place, he seems to instinctively know that they are his new tools of craft and the abilities of these items, it is only then that he realizes his own strength when he accidentally rips a door off the hinges, upon discovering his ridiculous strength he goes and further studies what changes has happened since his blessing it doesn’t take much the first thing he did was look in a mirror to find his skin bronzed as if he spent a full lifetime behind the forge.

After 2 days of studying the changes to his body a messenger arrives that its almost time and immediately heads towards the warlords headquarters to give him the collar called “Salvrogs Blessing”. Confused by its name he queries Hugo to explain, after a tale that most men would not believe would happen, the warlord smiles and says "as Salvrogs request your boon will be your freedom " he then presents Hugo with a small ivory badge with a horse with flaming hooves and a lightning tail engraved on it and says “if ever in my land show that to the local fort or village head and you will receive free passage and supplies” he then orders a soldier to escort him out and help supply him from his departure.

A few weeks into his adventure he has realized that he whenever he meets people they beg and plead for items of his various crafts even offering him their daughters and life savings just for one item, Hugo is eventually stressed out about this and decides to conceal his equipment. He stores his giant hammer and tools in a large instrument case customized to fit this gear.

Hugo was gifted with another visit of Salvrog in his dreams, telling him there is more to the world then the lands of Russia and told him that in his future travels he will find a seafaring vessel in 6 months with Salvrogs mark on it which only the Mystic Kuzyna could see, this vessel will be blessed for its long journey and will arrive safely on the other shore. 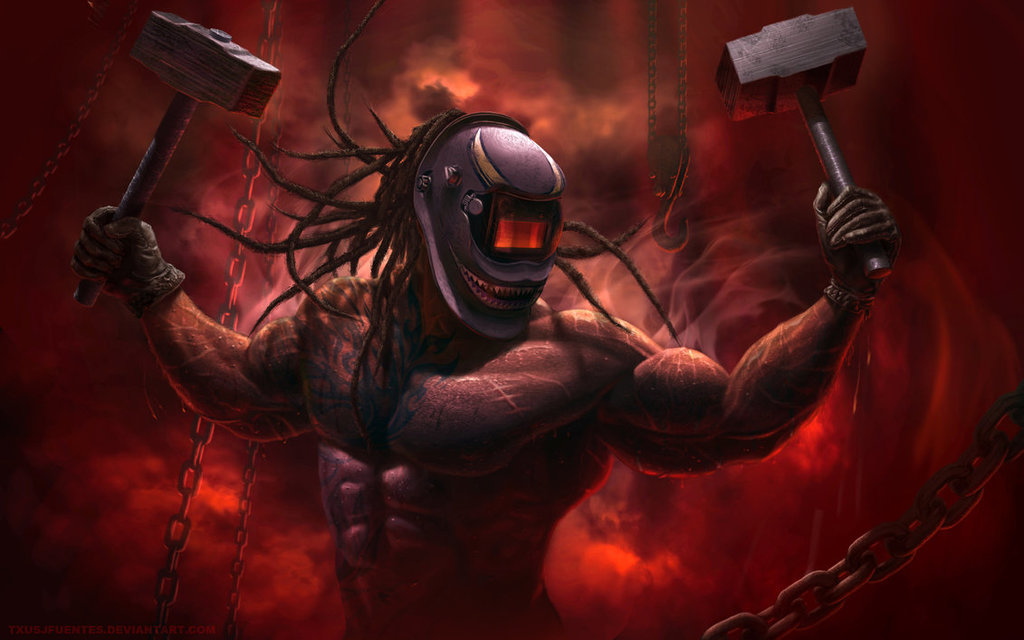