Mason, like all puss sacks that are initiated into the Atomic Monster Man Protocol, was luckily young enough to be unaware of the punishment that was signed to his pitiful puke soaked name. His C.O. immediately took great pleasure in making little iddy biddy piggy squeal and cry for his over bloated mommy! The lil pee stain passed the first weeks test, he didn’t drop dead. Not only did he survive the initial “freshmen beatdown”, he actually started to respond to the training very naturally. But it was this unadulterated violence, the unbridled fury and ridiculous training schedules, that carved Mason from the steamin’ stinkin pile of pigmy guano into a man. A monster man. Made to serve his country, not as a soldier dammit, but as the weapon to finish the fight. He was made into the gun, and the world is his friggin trigger. And by god the institute wasn’t going to waste the time and energy to send a wussy in his summer dress to do the hard things, a suit with a tampon in his wallet to make the hard decisions. They are sending the only, Mason Rogers. 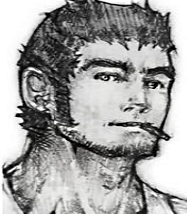