In its base shape, the Firebreath Trunk is a large red and gold chest with a the small head of a dragon serving as a clasp. When opened the chest it releases a rolling ball of flame that fades about half a foot into the air above the chest. Within the chest is a perpetual fire that offers light equivalent to a small camp fire and can be used for warmth, cooking and basic smithing. The strength of the flame increases as per the will of its owner, from a humble 1D6 S.D.C. flame to a raging 2D6 M.D. inferno; which is easily enough to instantly incinerate most mortal beings and reduce conventional metals to molten slag.

However, the Firebreath Trunk has a second function, by concentrating on the dragons head (counts as one attack/action) the owner can transform the chest into an impressive flaming longsword. Any materials within the chest (cooking food, etc.) magically vanish into a small extra dimensional pocket within the blade with dimensions equal to the chest itself but cannot be removed unless the object is reverted to its base-form. While in this fiery pocket dimension, the object continues to take damage (or cook) at a normal rate so small creatures imprisoned within the space will burn alive and meals will continue to prepare at the desired rate. Escape from within the blade once it has been shifted forms is not possible unless the character is capable of teleportation, dimensional travel or has access to very specific temporal magic. Note: Psychic characters with Sense Dimensional Anomaly or similar supernatural powers will be able to sense something unusual about the Firebreath Trunk while it is in its sword form.

The Firebreath Trunk once belonged to a miscreant Fire Warlock named Erahawias, from Douzor who sort to claim the secrets of the healing spring of Lydeana for himself. Dispatched by the Nymph and drowned in the surrounding swampland, Lydeana liberated Erahawias’s belongings and stowed them in her personal treasure hoard where they would sit undisturbed almost a decade. Some years later after having the purity of her spring restored by a small brotherhood of Warlocks, Lydeana bestowed the Firebreath Trunk on a small group of adventurers as a sign of her gratitude where it was claimed by Peter Johnson.

“Copyright © 1990, 2005 and 2014 Palladium Books Inc. & Kevin Siembieda; all rights reserved world wide. No part of this work may be sold, distributed or reproduced in part or whole, in any form or by any means, without written permission from the publisher. All incidents, situations, institutions, governments and people are fictional and any similarity to characters or persons living or dead is strictly coincidental." 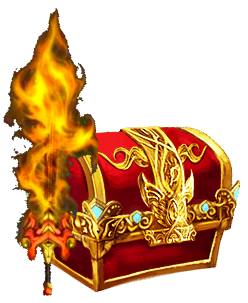