The TW Gene-Recalibrator is a small spherical machine with a diamond center and a ring of blade-like surgical apparatuses jetting out of it along its circumference. When the device makes contact with the naked skin on the hand of an S.D.C. being, it searches for a suitable power source within the operator. If the character meets the requirements (possessing 10+ P.P.E.), the device activates without warning and surgically implants itself into the palm of the operator. The entire operation is over in approximately 3 seconds and is incredibly painful, inflicting 1D4 damage directly to the operator’s Hit Points.

Once implanted, the device activates (absorbing the 10 P.P.E.), and super-charges the victim’s DNA, transforming them into a Creature of Magic. This has a number of interesting psychological side effects and after 24 hours of exposure, the operator is essentially transformed into a caricature of their former self, unable to grow emotionally or psychologically beyond their current state of mind. This means, an emotionally immature character will always be emotionally immature or a character well-known for their anger, will always be angry. However, many consider this a small price to pay for being transformed into a Mega-Damage being. The amount of Natural M.D.C. these devices bestow upon the operator varies from model to model (as per the Magical Resilient Magical Property; between 10-200 M.D.C.) and it is possible to possess more than one of these devices at a time (one in the palm of each hand), further increasing a character’s maximum potential M.D.C. However, doing so accelerates the onset of the stasis to 12 hours instead of the normal 24 hour period.

Deactivating the device will transform the character back into an S.D.C. being, but their Potential Psychic Energy remains committed to the device, unless it can be surgically removed. Additionally, surgically removing or destroying the device will enable the character to regain their clarity of mind and less exaggerated sensibilities. However, in the latter case the destroyed mechanism will remain embedded in the palm of the operator’s hand until an opertunity for it to be removed arises, which might lead to risk of infection or gangrene.

Device Level: 8th.
Construction Cost: 456 P.PE.
Spell Chain: Magical Adrenaline Rush (45; secondary) and Supernatural Endurance (12; primary).
Physical Requirements: One Diamond (10 carats; 150,000 credits)
Max Operational Duration: Indefinite. Although, it can be activated or deactivated by a Techno-Wizard or anyone familiar with the device, each second of activation counts towards the 24 hour limit.
Power Source: Host; activation is automatic and absorbs 10 P.P.E. from the operator, which cannot be recovered while the device is in use.
Construction Time: 6 hours.
Market Cost: 175,000-200,000 credits each; unavailable on Rifts Earth.

Three of these devices have been encountered to date, each during the perilous journey through the Murder Maze during Malcontent. They are currently in the possession of Gobi and Spray&wipe. 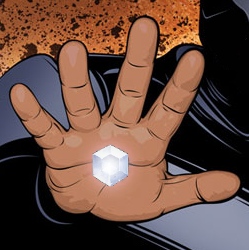