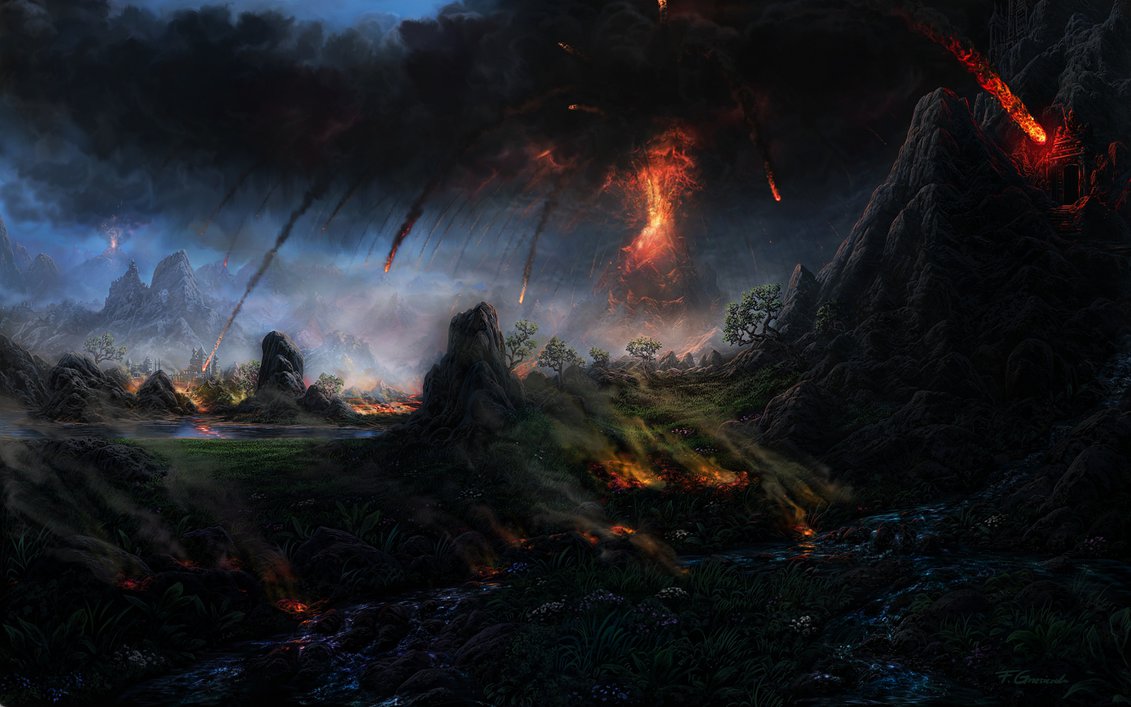 Amazzda is an alternate dimension of Earth that deviated from Earth’s current timeline during prehistoric times following the Cretaceous–Paleogene extinction event. In this timeline, instead of the meteor hitting near the Yucatán Peninsula the meteor crashed to Earth in Antarctica; throwing Earth slightly off its axis, triggering massive floods and drastically and forever altering the magnetic fields surrounding the planet. In this timeline, many of the dinosaur species survived along with a number of larger mammals. This would caused a drastic divergence in the evolution of humanity; resulting in Ogres becoming the dominant species on the planet rather than homosapiens, who (like Neanderthals) were bred out and eventually driven into extinction.

For millions of years Ogres and their primitive tribal culture would dominate Amazzda, until the fall of Atlantis on Rifts Earth triggered the explosive eruption of ley lines and rifts that would plague the low magic world for several generations. During this time seven great clans of Orcs found themselves stranded on the savage world with no way home. Lead by warmongers and ferocious power-hungry chieftains, the seven great tribes began vying for power and used their knowledge of steel and large scale war to unite and enslave the Ogres of Amazzda. Their war has cycled nearly endlessly ever since, with the seven great tribes endlessly locked in battle over territory, family disputes and feuds so ancient that most scholars do not even know their origins.

“Ashdautas Vrasubatlat” — “Someday I will kill you” (A standard Orcish greeting)
“Nar Udautas” — “Not today” (The standard reply)
“Nar Mat Kordh-Ishi” — “Do not die in bed” (This has several meanings)
“Ang Gijak-Ishi” (Angijak) — “Iron in the Blood” (A high compliment)
“Lul Gijak-Ishi” (Lulgijak) — “Flowers in the Blood” (usually in reference to Elves)
“Amal shufar, at rrug” — “Where there’s a whip, there’s a way.”
“Snaga nar baj lufut” — “Slaves don’t make war.”
“Ambor mabas lufut” — “Liquor after war”
“Vras gruiuk” — “Kill the women”
“Mabaj nar armauk” — “I have no enemies” (an Orcish lament)
“Mabaj bot ob armauk” — “I have a world of enemies”
“Mirdautas vras” — “It is a good day to kill”
“Vrasubatburuk ug butharubatgruiuk” — “We will kill all the men and sodomize all the women” (The Orcish equivalent of ‘cheers’)
“Afar Angathfark” — “By the forge of my soul!”
“Afar Vadokanuk” — “By all the dead!”
“Lul Gijak-Ishi” — “Flowers in the Blood” (“Pussy”)
“Nar Thos” — “No Sack”
“Undur Kurv” — “Fat Whore”

Trivia Notes
1. Migratory avians and cetaceans do not exist on Amazzda, although they can be found in its fossil record.
2. Compasses do not work on Amazzda (as magnetism essentially does not exist).
3. Pergu Bararn originated on Amazzda and, as his name implies, is of the Bararn linage.
4. The natives of Amazzda developed a brutal blood sport called Dafrim that draws many parallels to the Juicer Football of Rifts Earth.

“Copyright © 1990, 2005 and 2014 Palladium Books Inc. & Kevin Siembieda; all rights reserved worldwide. No part of this work may be sold, distributed or reproduced in part or whole, in any form or by any means, without written permission from the publisher. All incidents, situations, institutions, governments and people are fictional and any similarity to characters or persons living or dead is strictly coincidental."