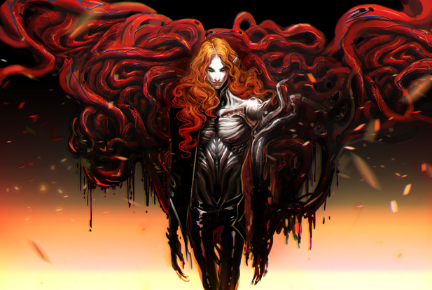 Apotamkin “The Crimson Lord” is a capricious Faerie Lord that has a morbid fascination with mankind. In his true form he appears a slim handsome man with porcelain skin, long red hair, vibrant green eyes, wings of churning viscera, and wicked black claws. However as a master shapeshifter, he can appear as human as you or I, or take on the forms of the beasts of the earth or the birds of skies. However, regardless of his shape he always possesses one of the aforementioned tells. Like most Faeriekind, Apotamkin has a fascination with children, practitioners of magic, and men who would dare to dream beyond their means, with adventurers holding a special place in the hole where his heart should be. Apotamkin is a liar of the highest degree, delivering truth three times to men only to the lie on the fourth. Likewise, he takes great delight in testing the limits of a character’s morality or personal belief system. Though his greatest joy is when truth forces righteous men to act against their values out of an ill-conceived preconception of necessity. Such as, revealing that a trusted friend is secretly working with a villain behind their back, while withholding the fact that they are only doing so to gather information to help defeat said villain. That said, despite his grim appearance Apotamkin is certainly the most jovial of his kind, though his sense of humor would be considered black comedy at the best of times. Traditionally, the only way to be rid oneself of Apotamkin is catch him in a lie and expose his true identity. After which he will not trouble the heroes for 1D4 weeks), by making him promise to never to trouble the heroes again (he will not break a promise – though he might show up from time to time in an attempt to help in his own special way), or by trading him back one of his jinxed objects (banishes him for 2D6 months).

Apotamkin Stats – NPC Antagonist
Pronounced: Ap-o-tam-kin.
Also Known As: Too many to name.
Alignment: Aberrant (Evil).
R.C.C.: Old One Essence Fragment (Four-Dimensional Being)
Attributes: I.Q. 16, M.E. 27, M.A. 16, P.S. 27 (Supernatural), P.P. 22, P.E. 21 (Supernatural), P.B. 38, Spd. 88 (60 mph/96 km).
Armor Rating: 10 on S.D.C. worlds.
Hit Points: 7,100 on S.D.C. worlds.
S.D.C.: 63 on S.D.C. worlds.
M.D.C.: 27,000 (30,000 if able to manifest at full power – impossible on Rifts Earth). Bio-Regenerates: 1D6 × 100 per minute and can regrow a new limb or reattach the head and dismembered appendages (counts as two actions/attacks per melee).
Awe Factor: 15; as a benevolent deceiver.
Horror Factor: 18; in true form.
P.P.E.: 5,000
Size: 6 feet tall with a 16 foot wing span.
Weight: As light as a feather or as heavy as the heart of a star, as per his desire.
Description: Tall and lean, with piercing green eyes and long red hair, visceral wings, and wicked claws.
Average Life Span: Ageless, effectively immortal.
Natural Abilities: Bio-regeneration, change size at will (no limit), create dimensional hole, create magical items, birth puppet (independent person/persona) 3 times per day, identify gods and mortals, impervious to aging, impervious to death from natural causes, impervious to disease, impervious to telepathy (can feed false information at will), knows all languages, magically sense Heartreaver’s location, metamorphosis: any (no limit), sense potential psychic energy at will, see the invisible, teleport at will, turn invisible at will (no time limit).
Vulnerabilities: Apotamkin has all of the standard vulnerabilities of normal Fairfolk, in addition to those mentioned in earlier in his description, plus all those common to standard Alien Intelligences (double damage from Holy Relics, etc.). Furthermore, should the players be able to steal Heartreaver then all attacks against the indestructible blade inflict damage directly to Apotamkin’s natural M.D.C. and cause him to suffer excruciating pain (which will automatically force him to return to his true form). As a part of his body, Apotamkin can recall the blade at any time but he must be able to draw line of sight to it. Fortunately for Apotamkin and not so fortunate for those who learn of this weakness, the Faerie Lord can magically sense the sword’s location at all times so long as it is not hidden from magical scrying. However, his greatest limits are “the rules” an abstract and somewhat bizarre faerie code which dictates who Aptomkin can and cannot interfere with and exactly what he can and cannot do at any time.
Attacks per Melee: 14.
Bonuses (Including attribute bonuses): +10 on initiative, +7 to strike, +9 to disarm, +9 to entangle, +10 to pull punch, +0 to damage, +7 to parry, +12 to dodge, +6 to roll with impact.
Damage: Inflicts 5D6 S.D.C. on a restrained punch. 3D6 M.D. on a full strength punch, or 6D6 M.D. on a power punch (counts as two melee attacks). Apotamkin’s ‘wings’ can be used to strangle, entangle, or disarm a foe up to 6 feet (1.8 m) away.
Alternatively, Apotamkin’s can draw a bone sword from his body called Heartreaver. Heartreaver possesses the eight standard abilities common to rune weapons (though it itself is not a rune weapon), and inflicts 1D6×10 M.D. plus Apotamkin’s supernatural P.S. bonus (even if someone else is using it) or 5D6 P.P.E. damage (choose at the time of the attack). Equally remarkable, all damage from Heartreaver heals/recovers at half the normal rate (even where magic is concerned!). Heartreaver is a part of Apotamkin and though it can be disarmed, stolen, and wielded by others, so long as the Faerie Lord can lay his eyes upon the blade he can call it back to his hand (counts as one action/attack per melee).
As a part of his body, if Apotamkin is ever slain than Heartreaver crumbles into useless dust.
Magic: Knows all invocations as per a 12th level mystic and can grant the wishes of others (though always with disastrous consequences).
Psionics: None. Even so, Apotamkin is impervious to aura reading and most telepathy and takes great pleasure in misleading psychics with false thoughts.