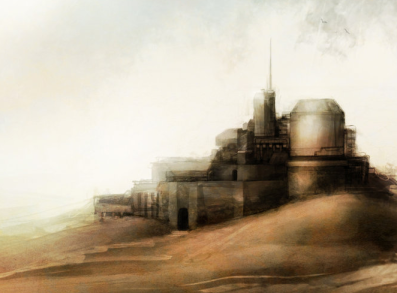 Ruling Class: King Kowa (6th level Scorpion Person Professional Gambler) and parliament of elected officials.
Motto: Perseverance, Faith, Passion
Capitol City: Z’mer (formerly Henderson, Nevada).
Flag: The flag is a black rectangle with two stripes of bright scarlet and a rectangle of dark violet in the upper left-hand corner. The emblem is a sparrow and dice.
Description: Z’mer is a relatively small city with corruption problems. Most of Z’mer is burred, with only a few portions protruding up from the arid scorpion plagued desert. Its main attractions are its talented street performers, inter-guild competition and strangely enough its cooking. The city guards are easily bribed. Z’mer’s population is primary human (50%) but it sports a large population of Scorpion People (45%) along with a smaller enslaved population of Shale Bogs (5%). Despite being mostly underground, Z’mer is a relatively cheerful place. Its people are fond of their political leaders. They are bordered on three sides by scorching desert sands but are fortunate enough to be on a large river that is used by Bandito Arms for trafficking their product. Their relations with their neighbors to the southwest are mercurial, while relations with neighbors to the north are strained at best. However, both would quickly become hostile were they to learn of Z’mers associations with Bandito Arms. They are sometimes troubled by violent crime and they are mocked for their local songs. While on the topic of strange customs, In Z’mer it is a crime to harm or kill a scorpion (or scorpion person). This is a crime punishable by death. Most executions are carried out by simply taking the offender out into the desert and chaining them to a large stone until they succumb to heat-stroke, dehydration or wandering predators.
There was a time Z’mer was controlled by humans descended from the survivors of the mythical city of “Henderson” but there came a time when demonic forces threatened to bury the city forever and wipe them out. Broken and practically helpless, they were forced to call on a small tribe of nomadic Scorpion people for aid. In exchange for their much needed assistance, the ancestors of Z’mer’s human population agreed to give the Scorpions kingship over Henderson on the condition that the king would have to answer to a parliament of elected officials. It has been that way ever since.
Since Bandito Arms has taken to using Z’mer to aid in the illegal manufacture and distribution of mega-damage weaponry, it has started to rake in money hand over fist and its people have never been happier or more content. 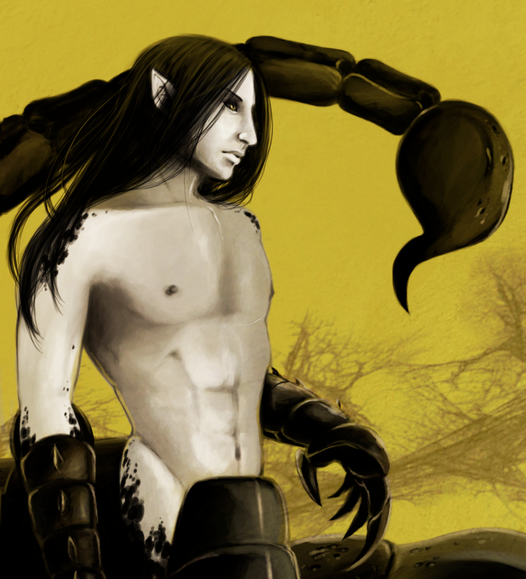 R.C.C.: Scorpion Person.
O.C.C.: Professional Gambler (6th).
Alignment: Unprincipled (Selfish).
Disposition: Self-absorbed but honorable and well-meaning. Something of a narcissist, King Kowa prides himself on his victories and quickly forgets his losses. Those who address his short-comings often find they cannot hold his attention. Those who conduct themselves disrespectfully or otherwise anger him quickly find that he can be every bit as ruthless in dispensing punishment as his father was.
Description: King Kowa is a benevolent but somewhat selfish and apathetic ruler. Inheriting his throne from his father, who in turn inherited it from his father before him, King Kowa understands all too well that he is little more than a figurehead and entirely at the mercy of the deliberative. Something he accepts is probably for the best.
King Kowa is a self-admitted gambling enthusiast (addict). He loves high risk and is always excited by the prospect of high stake games, politics and military operations. In fact, if there is no risk he rarely stirs from his lethargy. However, once so inspired his attitude and demeanor quickly shifts to that of a passionate man with childlike enthusiasm. Despite his predilection for high risk tactics over taking a sure thing, King Kowa is a skilled tactician and gamer. He prefers games with physical pieces (board games, tactical miniature games, chess, etc.) over electronic games (although he is quite skilled in a number of those too). He is also a massive fan of card tricks, stage magic and illusion (real magic bores him) and of course, gambling in all its many forms. Note: Although a notorious gambler, King Kowa is quite intelligent and experienced at spotting con-men. He will not accept any wager that does not have at least a modicum of success.

Notable NPC Residents
None, yet.

Trivia Notes
Z’mer is the home town of Jonathan Rhodes and the current home of his blind mother Helen Rhodes.